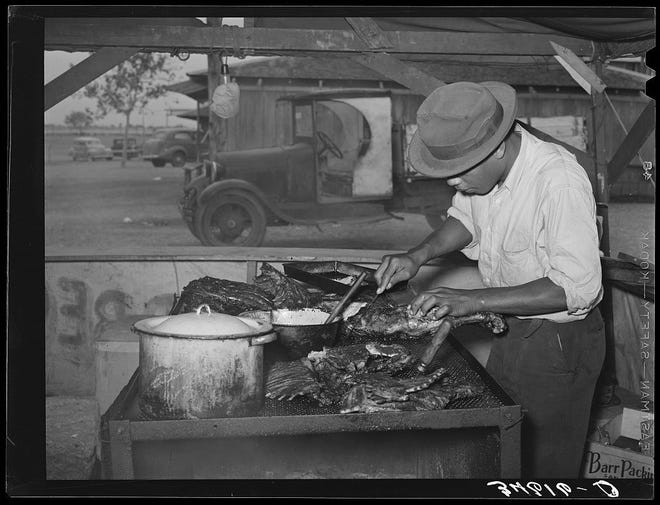 While I love a good library or archive – and god knows I love to go on road trips to talk to historical witnesses or experts in person – some of the sharper tools for researching the Texas history are as close as your favorite digital device.

Today’s column is dedicated to some of the most trusted digital resources. Please send your favorites to [email protected]

Originally published for decades in two volumes by the indispensable Texas State Historical Association, “The Handbook of Texas” can be found in any worthy reference library in this state and beyond.

In the 1990s, I purchased “The New Handbook of Texas,” a six-volume revision that has served me with unwavering accuracy ever since.

“The Handbook of Texas Online” is an improvement on both sets of books because it can be revised instantly. It allows historians and history buffs to extend the work’s encyclopedic range to topics overlooked and voices suppressed in earlier times.

Despite the loud claims of some culture warriors, after all, a standard story that is not revised with updated findings and ideas is not a reliable story at all.

A goldmine of words and images, this University of North Texas Libraries website combines digitized resources from countless state libraries, archives, and history centers. It offers multiple ways to narrow your searches by media, county, or artifact type, and includes digitized newspapers, city directories, and other invaluable resources.

On “Portal to Texas History” you can upload digital images in a choice of sizes, but be sure to save and share exact credits if distributing an image. Also check for fair use and copyright issues.

This posting of mostly historic images of Texas on Facebook and Twitter, as well as on its own website, might be the most ingenious state historian of all. I met Jac Darsnek in person, but for most readers in the digital world he remains fairly anonymous.

He applies a photographer’s eye for uniqueness and detail to the project.

Featured in Texas Highways magazine, Darsnek brings a delicate sense of civility and diplomacy to the subject. He graciously thanks his fans for their donated family photos and he avoids partisanship at all costs. Yet politics seeps into the whole story, as anyone who followed the ongoing plans for Alamo Plaza’s renovation will remind you.

You can purchase contemporary and historic photos at TracesofTexas.com, which includes a forum for Texas culture and history.

Continued:Texas History: The Rio Grande Is “The River That Runs Through Me”

A few years ago I switched from ProQuest, which only requires a public library card, to this paid site, owned by Ancestry.com, because the range of archived journals and on-screen tools are superior . I even took it to the next level because I work so often in this digital space.

The newly redesigned landing page needs some tweaking if you’ve used Newspapers.com in the past. Still, access is invaluable, and anyone who went almost blind watching microfilm in the bad old days will tell you it’s a lifesaver. I haven’t subscribed to Ancentry.com yet, but even its free areas are useful, especially if you’re doing genealogy work.

This site, much like Wikipedia, proves the power of basic research. Thousands of contributors have photographed over 210 million historic burial sites and annotated them with extraordinary precision. FindaGrave.com’s family trees alone have answered many of the questions I have been asked by readers in Texas.

In other places on the Internet, some birth records, ship records, legal documents, city directories, and census counts have been digitized. The 1950 US Census, the most recent available in this way, was just released on April 1.

While many Texas universities offer parts of their collections online, a special mention should be made of UT Arlington Libraries, which has a long history of collecting historical imagery from the state. He is universally admired for this.

A few more to check out: Briscoe Center for American History, Ransom Center, and LBJ Presidential Library, all at the University of Texas at Austin. Colleges and universities also support academic centers that study a subject of Texas history, such as the Liberty Colonies at Texas A&M University and the Lynchings at Sam Houston State University.

Because they are proprietary, I rarely use images taken by photographers from Texas Monthly, Texas Highways, Alcalde, or other digital magazines. However, I take advantage of their History Archive, where much of Texas history is expertly recorded. Remember that if you must republish fragments, get permission from the author and/or publisher.

Blogs, websites, and social media posts that focus on a single city or region of Texas are on the rise every day. I am a close follower of, for example, Dentonaut (Denton) and Houstorian (Houston) on Twitter, as well as Red River Historian (North Texas) on Facebook. I would follow many others with pleasure.

Continued:Tom Staley, who made UT’s Ransom Center a global powerhouse, dies at 86

In Austin, not a day goes by without checking out “Dazed and Confused Austin Edition/Pieces of the Past”, a Facebook page that posts thousands of fantastic photos of Austin long ago with thoughtful and generally polite comments that are particularly informative.

The digital podcasts are devoted to all sorts of Texas topics, including Evan Stern’s “Vanishing Postcards,” “TxArcanaRadio,” and, of course, “Austin Found,” which radio personality JB Hager and I produce on the Austin’s story.

I’ve already celebrated the universities in Texas that preserve and make available research materials, but I didn’t want to leave out the public libraries that do so as well. Among the ones I use most commonly these days are the Austin History Center and the Rosenberg Library History Center (Galveston).

The largest library of all, the Library of Congress, is also a great free resource.

Additionally, several state agencies make their collections available online. Of these, I use the Texas General Land Office primarily for maps, the Texas Historical Commission for information on designated historic markers and sites, and the Texas State Library and Archives Commission for materials they have published on their extensive collections of books, artifacts and government records. TSLAC watermarks their images. You must request unwatermarked copies.

Michael Barnes writes about the people, places, culture, and history of Austin and Texas. He can be contacted at [email protected]