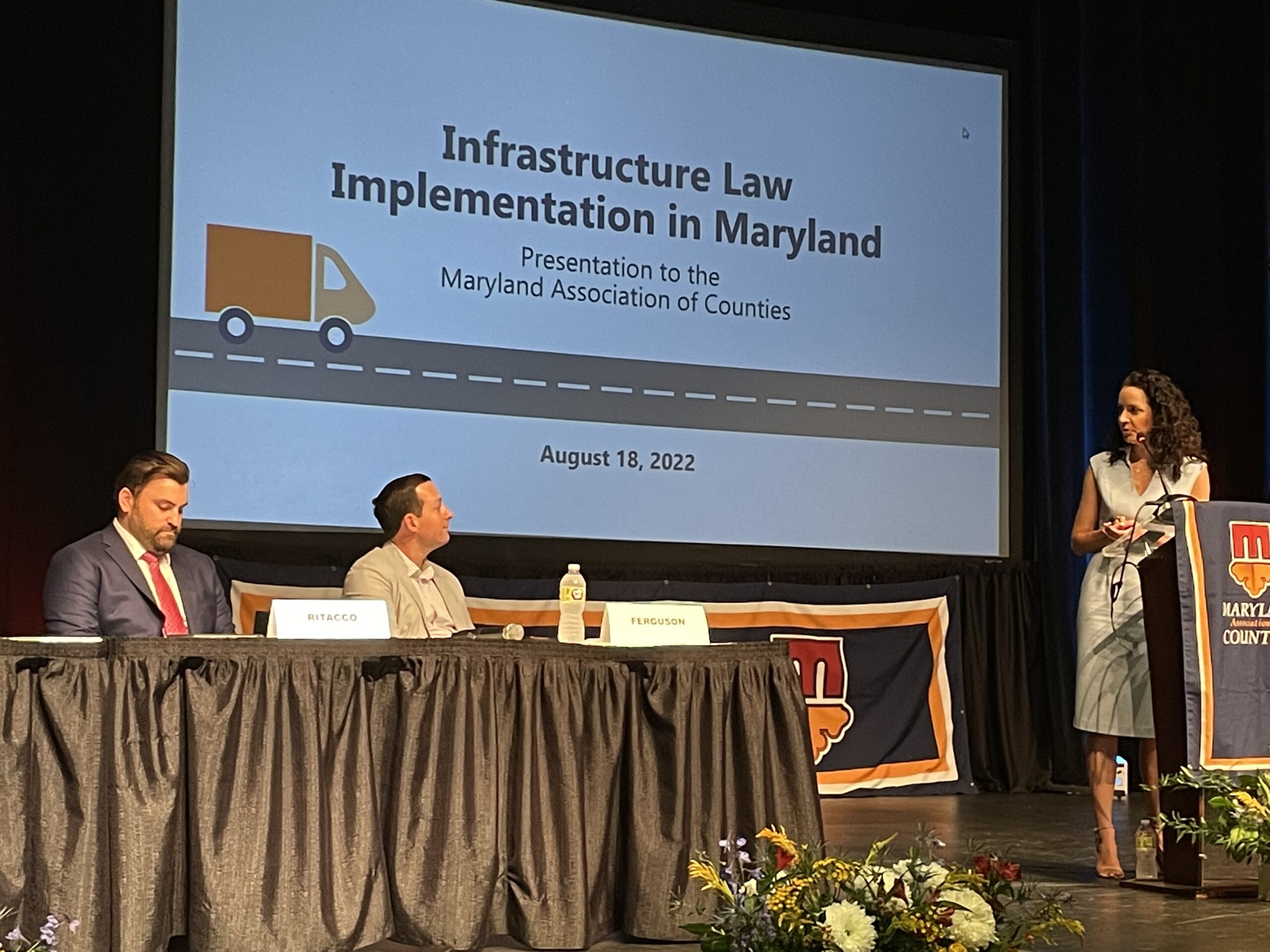 Maryland is guaranteed to receive at least $7.8 billion in federal infrastructure funding over the next five years. The money will be used to rehabilitate roads and bridges, upgrade water and sewer systems and bolster public transit in what the White House and congressional Democrats hailed as a historic investment.

Counties across the country will also be eligible to compete for approximately $100 billion in additional funds.

With so much money ready to be poured, it was no surprise that a panel discussion featuring the head of Gov. Larry Hogan’s “infrastructure sub-cabinet” was one of the most anticipated events of Maryland Country Association Summer Conference this week.

“We read the newspapers. We are watching TV. We know these [federal infrastructure] bills have been passed. We know there’s a lot of money there,” Trumbauer said. “We want to know: how does this money get to us?

Pete Buttigieg, U.S. Secretary of Transportation announced last week that $26.5 million in federal funds will be used to upgrade Penn Station in Baltimore and the New Carrollton Multimodal Station in Prince George’s County.

American Rescue Plan and Infrastructure Investment and Jobs Act funding criteria are still being developed. Localities will apply to the federal government for some of the money, while other funds will flow through Annapolis. Mayer said Hogan ordered shovel-ready projects take priority.

While Maryland can count on nearly $8 billion based on a federal formula, Sen. Chris Van Hollen said, other funds will be distributed on their merits. Preparation and understanding of the process is key, he advised.

“Counties and the state have to be prepared to compete for that money,” Van Hollen (D) said. “That’s a big part of the conversation here. These are not guaranteed funds.

Mark Ritacco, government affairs manager for the National Association of Counties, said the bipartisan infrastructure act funds local bridge projects, which have traditionally not been eligible for federal funding. Additionally, he said, the federal government is working to eliminate railroad crossings, which are often the scene of accidents between trains and vehicles.

The new federal legislation will also send millions of dollars to Maryland to fight climate change and promote cleaner modes of transportation.

In a separate MACo session on Thursday on climate, transportation and equity, Tom Peterson, who is president and CEO of the Center for Climate Strategies in Washington, DC, told officials that the proposed Bipartisan Infrastructure Act contains 375 different funding sources that states and local governments can tap for climate change and transportation programs.

“That’s a lot of different plums,” he said. “The question is, how do you shake the tree to get to the plum? When there’s a tree with lots of plum trees, you can get lost in it. The most important thing you can do is know what you’re doing. want.

“If we don’t spend this money properly, we can shoot ourselves in the foot,” he said. “We can’t keep doing things the old way.”

Peterson said 40% of the funding the infrastructure bill makes available to states and local governments must be used for “disadvantaged communities” – and cannot be accessed if it will not be used for these purposes.

Peterson also said the Cut Inflation Act, which President Biden just signed into law this week, will make $27 billion available to states for a range of anti-climate initiatives. And the state’s new Climate Solutions Now law is making money available for a catalytic climate change fund within the Maryland Clean Energy Center, which will leverage federal and private funds and be especially helpful for income residents. low and medium to be part of the climate solution, he said.

Of the. Robbyn Lewis (D-Baltimore City), a leading advocate for transit fairness in the General Assembly, said federal funding would be welcome, but state policymakers must commit to change their priorities for transportation solutions and move away from fossil fuels. – Cars on fire.

“We don’t have transportation equity in the state. We just don’t,” she said. “We put the comfort of cars before the well-being of human beings. And guess who suffers the most: African Americans, Native Americans, Latinos and the poor, including those who are white.