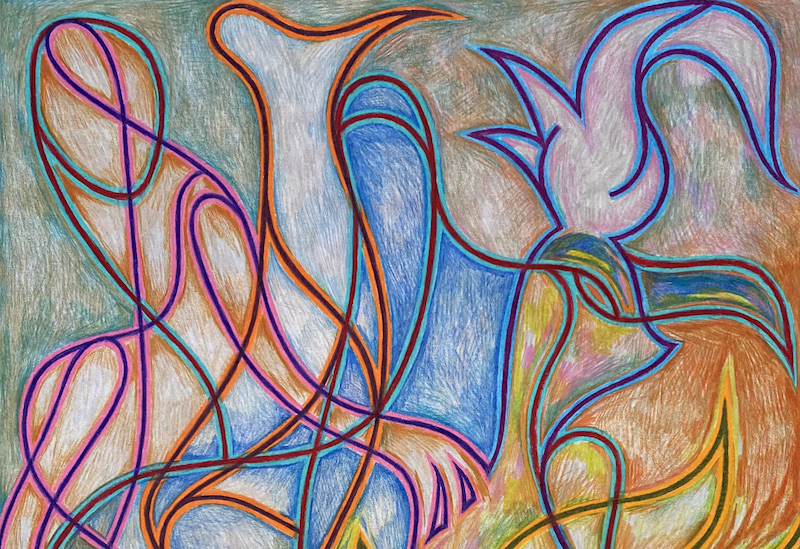 BITS & BYTES: ‘Walk the Line’ in Bernay; Lenox Preservation Committee hearing; Swingin ‘in the season at Ventfort; Bach at the New Year; Premiere of Angélique Kidjo

Bernay Fine Art will open its latest exhibition, “Walk the Line”, with an artists reception on Saturday December 11 from 4 to 6 pm Image: Noah Post, “Tossed and Turning”, detail, courtesy of Bernay Fine art

This new exhibition will show how varied and unique the use of the line is for each of these artists. There will be an artists reception Saturday December 11 from 4 p.m. to 6 p.m.

LENOX – The Town of Lenox Community Preservation Committee (CPC) will organize a public hearing Monday December 13 at 6 p.m., via Zoom, followed by a CPC meeting.

Lenox residents and community members are invited to provide their views on the city’s needs, opportunities and resources for community preservation under the categories Open Space and Recreation, Historic Preservation, and Community Housing.

Please contact Director of Land Use Planning / Planner Gwen Miller at [email protected] with questions or comments if you cannot be present on Monday evening. Information on Zoom meetings is published on the City of Lenox website.

LENOX– Ventfort room will celebrate the season with a holiday cabaret show by the singer Sherri James Buxton, Sunday December 19 at 3:30 p.m. Bob Shepherd will accompany Buxton on the six-foot rosewood Steinway piano recently returned to the museum by the Morgan family. The mansion will be decorated for the end of year celebrations, and tea will follow the program.

Guests will hear seasonal songs from Broadway musicals and the Great American Songbook, as well as traditional tracks and tunes requiring audience participation. A song of traditional carols, including “The Twelve Days of Christmas” with pieces for 12 (or more) members of the public.

Sherri James Buxton is an elegant performer of a wide range of genres, from performance standards and tunes to jazz. She combines a longtime love of melody and lyrics with a highly skilled voice. Buxton has appeared on and off Broadway, and in numerous cabarets. She got her first professional hiatus at the age of 17 when she was cast as The Girl in an off-Broadway production of “The Fantasticks”. Buxton was in the original Broadway production of “Look to the Lilies” and has performed locally at the Pittsfield Jazz Festival, Colonial Theater, Norman Rockwell Museum, Gateways Inn, Castle Street CafÃ© and other venues. Buxton’s jazz band, the Sherri James Buxton Trio, was the main attraction of the Cranwell Resort Music Room dinner club. Sherri teaches at Berkshire Music School, where her Cabaret workshop is in its 20th season.

Bob Shepherd has worked as a pianist in New England for 70 years.

Tickets cost $ 45 per person and reservations are required by calling 413-637-3206. Proof of vaccination, ID and masks are required to attend the show.

GREATER BARRINGTON – The Berkshire Bach Society returns to the concert hall live, with nine-time Grammy Award-winning Eugene Drucker leading the Berkshire Bach Ensemble in three performances of the Complete Concerti “Brandenburg”: Friday December 31 at 6 p.m.. to Mahaiwe Performing Arts Center in Great Barrington; Saturday January 1 at 3 p.m. at Troy Savings Bank Music Hall; and Sunday January 2 at 3 p.m. at the Northampton Academy of Music. Tickets are available at Berkshire Bach website and via the ticket office at each site.

This year’s concerts are dedicated to the memory of Kenneth Cooper, Music Director Emeritus, who established the popular holiday tradition in 1993 and led the keyboard group until 2018.

This is Drucker’s fifth season as Music Director and his second live performance of the six â€œBrandenburgâ€. Drucker is co-founder of the Emerson String Quartet and a longtime member and soloist of the Berkshire Bach Ensemble. This year he is joined by eminent harpsichordist Kenneth Weiss, who plays the continuo in each work and takes center stage as a soloist in the difficult â€œBrandenburgâ€ No.5.

Bach wrote and performed the six works that would later become the â€œBrandenburgâ€ Concerti at various times during his tenure in the city of KÃ¶then, where he worked for a music-loving prince and made the court orchestra a force of the day. virtuoso interpretation. In 1721 he copied the scores and presented them as a set to the young Margrave of Brandenburg in Berlin to fulfill a long-standing order. It is clear, however, that the Margrave’s musicians were not up to the task of performing the works, which are written for an unusual variety of instruments and are technically difficult. The manuscripts remained intact in the Brandenburg Library until their rediscovery in the 19th century, but were said to have been nearly destroyed during World War II, when their evacuation train was subjected to an aerial bombardment and the librarian carrying the sheet music s’ escaped with them hidden under his coat.

ADAMS NORTH – “Yemandja, A new piece of musical theater designed by and starring four-time Grammy Award-winning Angelique Kidjo, will be the centerpiece of MASS MoCA annual benefit Saturday March 5, 2022 at 4 p.m. A cocktail after the performance will be followed by a dinner with the actors and an auction of works of art in building 6 of MASS MoCA. In addition to the benefit performance, a general admission performance of “Yemandja” will take place. Friday March 4 at 8 p.m.

Inspired by her ancestors, her family and the resilience of Africa, singer and storyteller AngÃ©lique Kidjo’s theatrical work is both a family drama and a historical thriller, with themes of love, betrayal, honor and free will. Located in the 19th century in Dahomey, the West African kingdom that once occupied the territory that is now Benin, the slave trade is omnipresent. In the port city of Ouidah, Yemandja – a deity of water and fertility, played by Kidjo – gave her protege Omolola a secret gift: the power of song to change the course of history. But there is a caveat: power only works if the heart is pure. As DeSalta, a Brazilian slave trader who made a deal with King Akaba and controls the city, kills or enslaves those around Omolola, she struggles to access her song, her desire for revenge threatening. to go beyond its will to be a positive force.

Written by Naima Hebrail Kidjo, this fully staged production is directed by Cheryl Lynn Bruce, designed by Kerry James Marshall, and features a cast of 14 performers and musicians.

“Yemandja” has participated in rehearsals and a production as part of the MASS MOCA artist residency program and will be attending the Broad Stage in Santa Monica, Cal Performances in Berkeley, the Kennedy Center and the Holland Festival after its premiere. global.