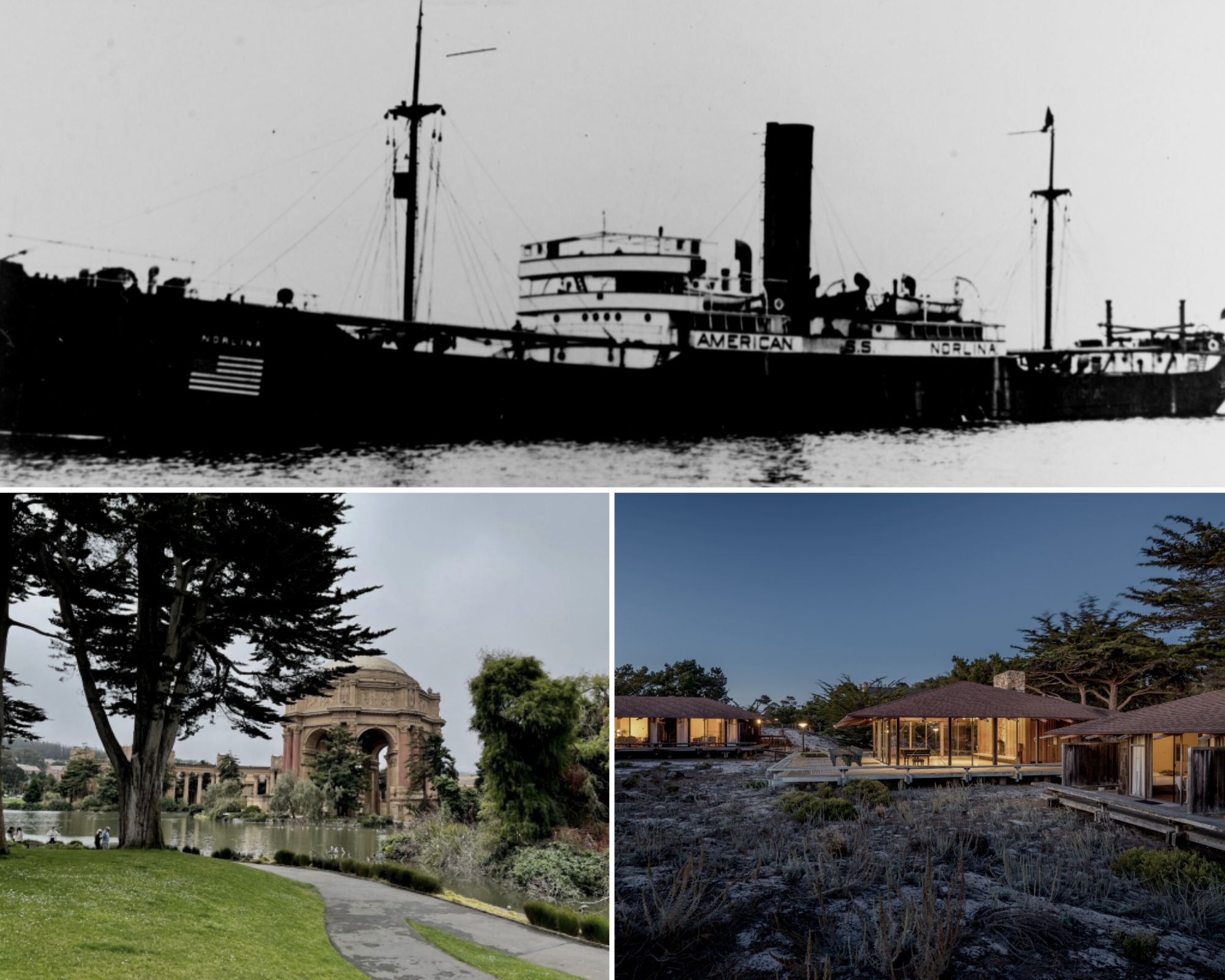 One of the nominations being considered by the Commission is NORLINA, the submerged archaeological site of the steel-hulled steamer that struck the jagged shoals south of Horseshoe Point and came to rest at Gerstle Cove near Salt Point in 1926. Another nominated property is the San Francisco Palace of Fine Arts, which was to serve as a temporary facility for the 1915 Panama-Pacific International Exposition. It is the only surviving building from the World Exhibition. The palace quickly became one of California’s finest buildings, despite its lack of function and temporary nature.

Here are some of the properties considered at the meeting:

Appointments to the National Register of Historic Places

The neighborhood, located at the western end of Pacific Grove and overlooking Asilomar State Beach, consists of 22 buildings and associated landscape features designed by John Carl Warnecke & Associates after the State of California acquired the property in 1956. Originally a Young Women’s Christian Association (YWCA) designed by Julia Morgan, Asilomar’s initial stage of development was between 1913 and 1928. The historic Asilomar Conference Grounds has been designated a landmark National Historic Landmark in 1987 for its association with the history of the YWCA and as a significant work of a master architect. Warnecke created a master plan to expand the original site and make it more accessible to automobiles, blending in with both the natural surroundings and the older buildings of Asilomar. The resulting distinct architectural context and period of significance from 1957 to 1968 allows for a new stand-alone nomination rather than amending the previous nomination with additional documentation.

The submerged archaeological site is that of the steel-hulled steamer NORLINA (1908-1926). NORLINA – also known historically as HARFLEUR, GEORGIANA and USS NORLINA – was built in 1908 in West Hartlepool, England at the William Gray and Company shipyard as HARFLEUR. Between 1909 and 1926, the ship served as a steam freighter under multiple owners and nationalities, including service in World War I under charter to the United States government. In August 1926, while en route from San Francisco to Puget Sound with the Garland Steamship Corporation, the NORLINA struck the jagged shoals south of Horseshoe Point and came to rest at Gerstle Cove near Salt Point. The steamer was a total loss and heavily salvaged before breaking up and sinking.

The building and four structures in a park in the marina district were originally designed in 1913 for the Panama-Pacific International Exposition. The palace was designed by architect Bernard Maybeck as a forgotten, overgrown Roman ruin and intended as a temporary settlement, and the citizens of San Francisco engaged in heroic efforts to preserve the property, the only building survivor of the 1915 Exposition. The palace quickly became one of California’s finest buildings, despite its lack of function and temporary nature. A long-term project, planned in the 1950s and begun in the 1960s, rebuilt the Palace into its current permanent form, a project completed in 1974.

Placement on the National Register can help bring positive attention to a historic place and affords a property the honor of being included on the National List of Cultural Resources Worthy of Preservation. This may provide some degree of protection against adverse effects resulting from federally funded or authorized projects. Registration also offers several incentives for preserving historic properties, including special building codes to facilitate the restoration of historic structures and certain tax advantages.

All nominations and photographs of the properties under consideration at this Friday’s meeting are available online.

This Commission meeting will take place in person and via video and teleconference on Friday, August 5 at 9:00 a.m. The Commissioners will meet in person and the meeting is open to the public in the auditorium of the Natural Resources Agency Building located at 715 P St., Sacrament. The public may also view the meeting through CAL-SPAN or participate in the meeting by registering through the Zoom link posted on the State Historic Resources Commission Meeting Schedule and Notices page of the Board’s website. of Historic Preservation at ohp.parks.ca. gov/SHRCnotices.

Those who wish to watch the meeting but not provide commentary do not need to register and can watch a live webcast, with archived video provided after the meeting, at www.cal-span.org.