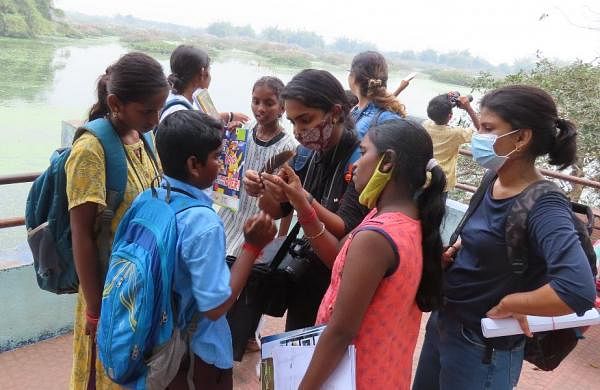 “When we try to pick something out on its own, we find it hooked up to everything else in the universe.” This was the view of one of the universe’s most defining naturalists and environmental philosophers, John Muir.

Yuvan Aves and company are naturalists of the same breed. For years, the work of these naturalists has encompassed all actors and their needs. He valued education and advocacy with equal measure.

It thrived on the knowledge resources and lived experiences of local communities. In the process, he became a framework for others like them to follow. But how to bring out the fruit of this work beyond these limited limits?

How do you offer these solutions to a wider audience? Yuvan and his team responded to this by founding the Palluyir Trust for Nature Education and Research.

With this trust, the team aims to create various nature education resources, programs and interfaces; working with children and the public across ages and social backgrounds. It’s a way to give themselves a legal and financial basis for work they’ve already done, begins Yuvan.

“Our work in this area began with the Coastal Biodiversity Mapping Project of the Madras Naturalists Society and its team. But we needed a place to take our work forward. I also wanted to financially support my team members and help them to do more in-depth studies. For that, I needed a financial structure. So, we founded this Trust in December,” he says.

All of them met Yuvan through MNS shore walks or the Coastal Biodiversity Project or the work of the Chennai Climate Action Group (CCAG). Barely three months into the Trust, while they are still fundraising for their efforts, the team is busy setting up four projects.

These also rely on the expertise of the local community. “One is the Coastal Program for Fishermen’s Children (a one-year learning program for the children of Urur Olcott Kuppam). For them to discover that their beach is a rich and lively learning space , unlike any other class. We were able to show this five months into the program. We are working with Pudiyador inside Urur Kuppam,” says Yuvan.

The second project is the creation of Seashells – An Activity Book for the Beach and Ocean. It will serve as a coastal handbook for schools, which will house a host of activities and lesson plans, aligned to the curriculum and sensitive to the development of different age groups and learning styles.

For this, the team works alongside MNS. For the advocacy and conservation work of the Ennore-Pulicat wetlands, they rely on the CCAG foundation. “We’re one of those organizations. But the idea is to have a collaborative spirit and partner with different people doing the same job,” she says.

The fourth project is the creation of a biodiversity-based card game that offers insight and information about local flora and fauna through a fun and interactive mechanism.

When Charlotte chose to do a bachelor’s degree in zoology for her undergrad, she didn’t imagine she would be working on a card game before she even graduated. However, an internship at MNS and she seems to have found her way to this slice of novelty.

“There’s this game called Phylo that already exists but is more complex than what we’re looking for. And it’s not based on Indian biodiversity. We took inspiration from there. It was supposed to be some kind of map flash, more like a “Who am I” riddle but that evolved further once we saw the different nature-based card games, so we made our own. people learn more about their local habitat through this. For any material you take has a lot to do with the biodiversity of the West,” she shares.

Charlotte has her own dream for the Trust – to successfully create a nature studies curriculum based on Indian diversity and have it used in local schools and colleges. The manual, of which Nikkitha is one of the authors, is the first step in this direction.

“If you look at it at a macro level, the ultimate goal is conservation, right? That’s what we’re trying to do here. documenting it and sharing it with others is the dream,” she says.

For Yuvan, the dream is to also be able to support naturalists. “What I’ve found in my experience is that if you want to protect the place, protect the people who are passionate about protecting the place. Right now all the work I do is related to nature education and writing related to ecology. , and I am able to support myself. Yet it has been such a difficult journey with so many societal taboos. So I want to support people who are passionate about nature. I want to say to these people: if you want to engage in this field, there is a community for that, it can be supported. At the moment, we can only afford small allowances but it’s something,” he notes.

And this dream is already coming true, even within the core team. Charlotte turned to zoology because of the biotech element it contains. Now she sees that animal behavior and wildlife conservation in itself can be a career path – information that was not available to her when she was about to enter university. She hopes to help people see nature conversation as a rewarding career path.

Nikkitha, another zoology student, found a way to convince her family and friends – who could only associate the subject with animal husbandry and husbandry – about her career path. It also allowed her to link her university studies to the world in which she lived and to acquire practical knowledge. She hopes to be able to pass that on.

(For more details, and to donate to the cause, visit Instagram: a_naturalists_column)