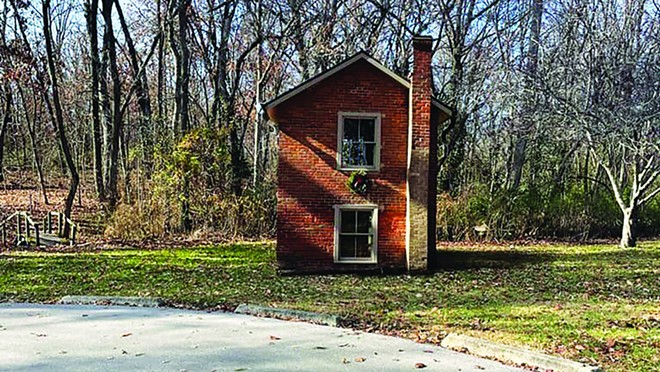 Save Leland House’s summer kitchen. Donations can be made at gofundme.com Help Move the Historic Leland Sucmmer Kitchen or by messaging Lisa Moffett via Facebook. Donations can also be mailed or dropped off at any United Community Bank location.

Hats off to Lisa Moffett and Theresa O’Hare who stepped in to save the famous Leland Farm’s summer kitchen, even though the main house was demolished. And hats off to the Springfield Park Board of Trustees for understanding the importance of preserving a piece of history and for entering into a letter of intent for the summer kitchen to be placed in Washington Park, the land that belonged formerly owned by the Leland family in the late 1800s and early 1900s. This isn’t the first time Washington Park has become the new site of historical artifacts; in 1974, when the Seventh and Capitol’s Carnegie Library was demolished, the large neoclassical columns of the library’s facade were carefully removed and placed in the Washington Park Botanical Garden.

It’s comforting to know that there are people who care about historic preservation, even though Springfield is often known for tearing down instead of fixing. When the demolition of the Leland Farm was underway, many walked past the site, decrying the loss of the historic home. Yet when it was announced that the summer kitchen could be saved and donations could be made, where was everyone who had been so worried?

Bigger questions plagued me. Why were the Leland House and other historic structures not protected from demolition a long time ago? What does it take to create a culture of historic preservation?

I turned to two historic preservation experts, Dick Hart, who recently received the First Citizen award for his work in saving Strawbridge-Shepherd House and other sites, and Michael Jackson, who was a preservation architect for the Illinois Historic Preservation Agency during the Dana campaign of 1987-1990. -Restoration of the Thomas house. Both said the first need was for a comprehensive plan – developed by a city like Springfield and a village like Leland Grove. Jackson says, “Look at Jacksonville. The city first identified its historic sites and homes, then developed a long-term stewardship plan for the continued use of these historic properties.”

The Leland House was never listed on any historic register, which the Village of Leland Grove could have sued decades ago. Identification of historic homes, according to Jackson, is possible through the Historic and Architectural Resources Geographic Information System (HARGIS). This online tool allows researchers to investigate and examine potentially important properties based on the best available data. Sites can be added with information provided by interested parties. A quick search of the Springfield area, which includes Leland Grove, shows many structures that have been identified as possible candidates for designation on the National Register of Historic Places, as well as those that have already been included (Dana-Thomas House, Hickox Apartments, Vachel Lindsay House, Governor’s Mansion, etc.). A plan should be developed to determine what can be done to protect these sites.

Is there a complete map of the city of Springfield? Is Leland Grove planning a plan? Shouldn’t leaders look at current sites that may be important to the region and then create an overall plan?

I hope we can focus on the preservation and protection of historic structures in many parts of the city. I’m heartened that preservation work is underway – Judge Taylor’s 1857 home, John Condell’s house on Fourth Street that belonged to a tradesman who sold it to Abraham Lincoln and area Enos Park.

I hope everyone who values ​​historic preservation – and especially those who mourned the loss of the Leland House – will donate. The summer kitchen must be moved by February or it too will be demolished.

Cinda Ackerman Klickna moved to Springfield in the 1960s and remembers the Orpheum Theater being demolished and seeing too many structures suffer the same fate.