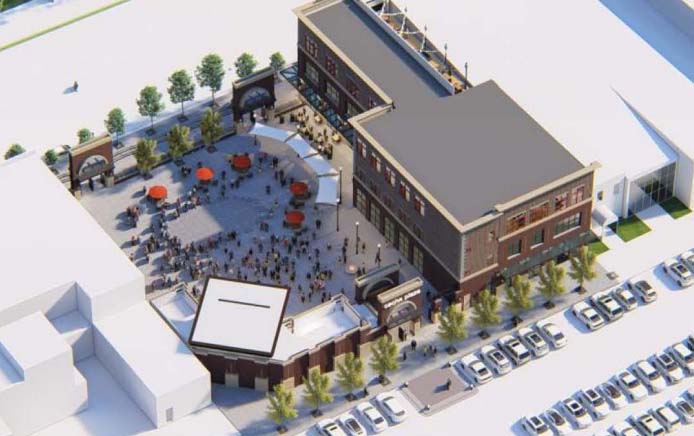 This artist’s rendering is an aerial view of the Center Block Plaza that Logan town officials plan to build in the footprint of the vacant Emporium Building, which is now slated for demolition.

LOGAN – The Historic Preservation Committee (HPC) has finally given its blessing to Mayor Holly Daines’ ambitious plan for the redevelopment of the downtown Logan Center Block.

A unanimous vote of CHP members on Monday paved the way for the demolition of three buildings in the Main Street Center Block – including the iconic Emporium – and the construction of a public plaza and associated improvements.

These amenities will include a stage, playground and administration building at the west end of the property and a portable ice rink in the winter.

The move removed the final hurdle in the City Center Block redevelopment plan and CHP member Bronwyn O’Hara praised the mayor for the political courage that kept his visionary plan alive in the face of the opposition from some members of the business community and the public.

Daines said the final plan for the Center Block plaza presented on Monday included many suggestions from CHP members and affected city residents.

Only one local resident raised concerns about the plan at the CHP meeting, wondering if the entertainment events at the plaza stage could distract Main Street drivers.

The Logan Center Block is bounded by Center Street to the south, Main Street to the east, 100 north to the north, and 100 west to the west.

Acting in their capacity as Logan’s redevelopment agency, members of Logan City Council committed nearly $ 6 million in city funds to the plaza project in early March.

City officials have also requested another redevelopment grant in the amount of nearly $ 1.6 million for the redevelopment of structures adjacent to the proposed plaza to the south at 41 and 45 North Main Street.

At the HPC meeting on Monday, Daines explained that these historically important structures would be remodeled to serve as a restaurant and, hopefully, sold to commercial interests.

After the RDA grant was awarded in March, HPC’s favorable decision on Monday was almost guaranteed.

In 2019, the CHP derailed the city’s demolition plans for the Center Block area because previous historical surveys had revealed that the properties at 41, 45, 47 and 67 North Main were of historical significance. .

But CHP members were much more receptive to a preliminary overview of the current concept of the Center Block plaza that was unofficially presented to them in the fall of 2020.

This proposal revision eliminated plans for a multi-storey residential complex in the Center Block and included the preservation of historic structures at 41 and 45 Main Street North.