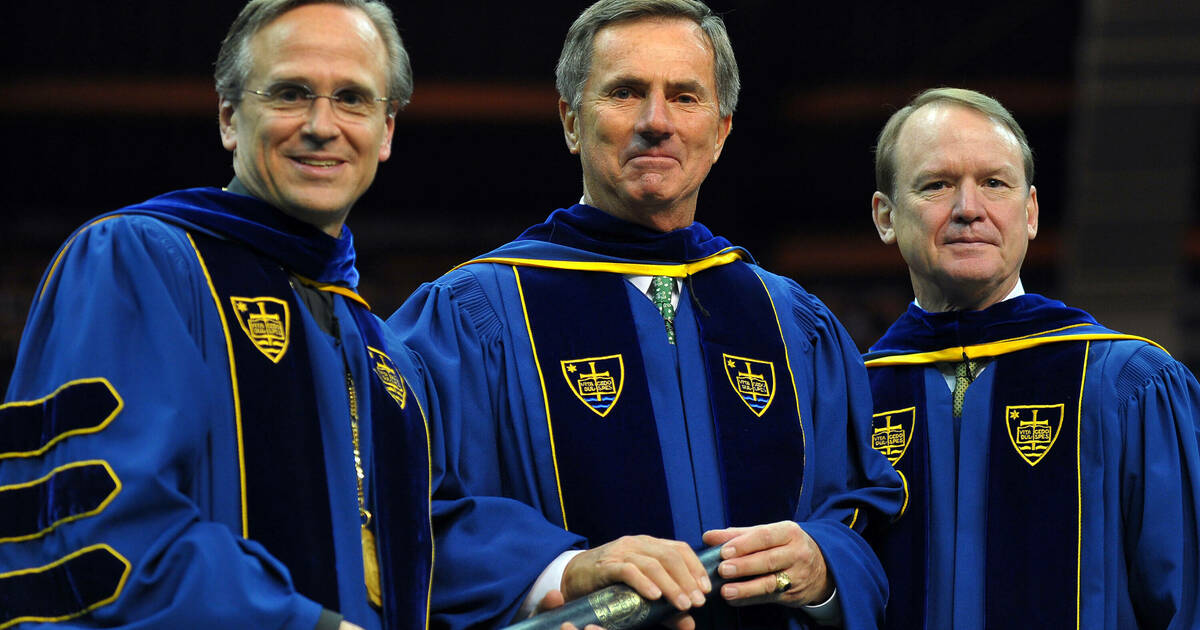 Notre Dame Administrator Fritz Duda (center) received an honorary degree in 2009 from President Reverend John I. Jenkins, CSC (left) and then Chairman of the Board Richard Notebaert

The administrator of the University of Notre-Dame Fritz Duda; his wife, Mary Lee; and the family foundation donated $ 30 million to the University’s School of Architecture to establish a center dedicated to historic preservation in the area.

Named in memory of the couple’s son, the Michael Christopher Duda Center for Preservation, Resilience, and Sustainability will be housed at the School of Architecture but will serve as a hub for campus-wide work related to the centre’s goals. The donation will also allow the school to expand its cutting-edge program in urban planning and traditional architecture and town planning; support new professorships; sponsor national and international conferences on campus, in Texas and Chicago and at Notre Dame Global Gateways; and provide financial assistance to graduate students working in the field.

â€œFritz and Mary Lee have been wonderful supporters of Notre Dame for decades, particularly with regard to our school of architecture and the university’s development projects in the neighboring community, and Fritz has provided valuable leadership to the on our Board of Directors, â€said Notre Dame President Rev John I. Jenkins, SCC, said. â€œWe mourn with them the loss of Michael and celebrate his life with this extraordinary gift. They have our deep gratitude for their generosity and dear friendship.

Stefanos Polyzoides, Dean of Architecture Francis and Kathleen Rooney, added: The entire architecture program with the principles of sustainability and resilience that are key to Notre Dame’s mission to be a force for good in the world. I can’t think of a more fitting way to honor the legacy of Michael C. Duda, who focused his too brief career on preserving the heritage of places he loved.

Michael Duda’s steadfast interest in historic preservation grew out of his concern that there was a better way to live for everyone, a belief that grew stronger during his undergraduate years at the School. architecture of Notre-Dame. After graduating in 2005, he practiced architecture in California before returning to his native Texas and obtaining an MBA from Southern Methodist University. He joined his family’s real estate company, then in 2018 launched his own, the Briar Cove Development Co. He died at the age of 38 in 2019.

In recognition of his love of Texas architecture and history, Michael was appointed to the board of directors of the Texas Historical Foundation in 2011. Duncan Stroik, professor of architecture at Notre Dame, was named earlier this year administrator of the Texas Historical Foundation’s Michael C Duda Endowment, which supports efforts to preserve and celebrate the state’s buildings, bridges, monuments and other landscapes, and the people who created them.

â€œMichael Duda was very proud of his Texan heritage,â€ said his father, Fritz. â€œInspired by his passion for historical learning and reading, he developed a keen interest in preserving and respecting the elements that make this country great. As a young board member of the Texas Historical Foundation, he drafted the initial charter for the foundation’s architectural endowment. His calm and determined leadership made the difference. The architectural endowment of the foundation now bears his name.

In an article titled â€œAnother Size Class,â€ Foundation President Bruce Elsom wrote, â€œMichael knew who and where his passions lay. His commitment was indisputable, certain and impactful. He had a vision and was not afraid to take a risk; his efforts place him among the makers of difference. Faith, family and friends were at the heart of his life. He was also self-effacing, so it was left to others to brag about his many accomplishments. “

â€œOur family is happy to share our blessings now as we advance Michael’s legacy in Notre Dame’s transformation center for preservation, resilience and sustainability,â€ added Fritz Duda. â€œThe mission of this center will pave the way for new watermarks and a greater call to Our Lady. It’s a future that resonates with life’s passions that have their roots in his educational experience at the college he loved.

Fritz Duda is the founder and president of Fritz Duda Co., a Dallas-based investment and development company. A graduate of Hastings College of the Law at the University of California, he served on the advisory board of the Notre Dame School of Architecture for seven years before being elected to the board in 1997.

During his time on the board, he chaired the Facilities and Campus Planning Committee and was instrumental in the Eddy Street commons redevelopment project to the immediate south of the campus. He also chaired the ad hoc international facilities committee responsible for the acquisition of the facilities for the Global Gateway from Rome to Notre Dame.

The Dudas have already made many generous donations in support of a wide range of Notre Dame initiatives, including the Fritz L. and Mary Lee Duda Family Scholarship, the 16-acre Irish Green on the side. south of the campus, endowed chairs and the Alliance for Catholic Education, of which he is a member of the advisory board. He received an honorary Doctor of Laws degree from the University in 2009.

Mary Lee Duda is a graduate of the University of Iowa and has long been involved in religious, educational and community service programs and projects. Along with Fritz, she continues to be deeply involved and has provided advice and support to Notre Dame, including long-standing service to the University’s Irish Advisory Board. A chair endowed with literature is in his name.