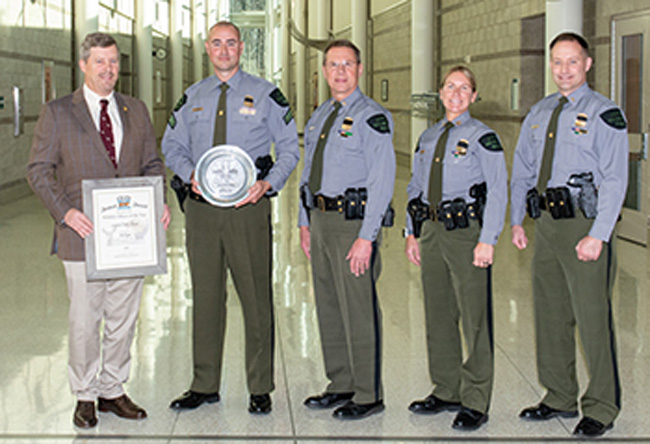 LANSING — The Conservation Officer of the Year award is the state’s highest honor for conservation officers. Cpl. Mike Hearn, a conservation officer with the Michigan Department of Natural Resources from Kalkaska County, has been recognized as Shikar Safari’s 2021 Wildlife Officer of the Year. The award was presented at the Michigan Natural Resources Commission meeting at Lansing Community College West Campus in Lansing.

“As a true game warden and game warden, it is my privilege to celebrate Cpl. Hearn as the 2021 Conservation Officer of the Year,” said Chief Dave Shaw, MNR Law Enforcement Division. “Hearn has a consistent and impressive record on all natural resource matters, including recreational safety, community relations and general criminal activity. His positive and organized teamwork philosophy makes him a valuable asset to the DNR Law Enforcement family. We look forward to the many other professional accomplishments he surely has ahead of him.

A 2004 graduate of DNR Conservation Officer Recruiting School No. 3, Hearn patrolled Oscoda County for four years before transferring to Kalkaska County, where he patrolled for 13 years. Hearn gained valuable experience as the sole conservation officer for both counties for several years. His ability to create excellent relationships with constituent groups, the court, landowners and local law enforcement agencies has made him a vital community asset.

Early in his career, Hearn successfully investigated a case where two dogs were killed during the 2008 juvenile hunt, resulting in a restitution of $20,000 to the dog’s owner.

In 2020, Hearn received a hunter harassment complaint and was able to link the patterns to someone he met in 2013 for illegal hunting. The 2013 case resulted in the suspect’s hunting license being revoked and more than $16,000 being returned to the state. For the recent case, Hearn collected evidence from four remote hunting locations owned by the same person. Based on the amount of evidence gathered, Hearn was granted an 11-count warrant for the arrest of the individual.

In 2018, Hearn safely located two teenagers and took their armed captor into custody, when the minors went missing after failing to return from school.

In 2021, Hearn was promoted to his current position as a corporal with the Recreational Safety, Education and Enforcement Section of the MNR Law Enforcement Division. His strong resume in recreational education and law enforcement initiatives as a field officer made him a qualified candidate to oversee MNR’s snowmobile and off-road vehicle programs.

Hearn’s knowledge has been instrumental in training new officers and working with other officers on speed camera programs to analyze snowmobile and ORV accident patterns to plan advanced patrols.