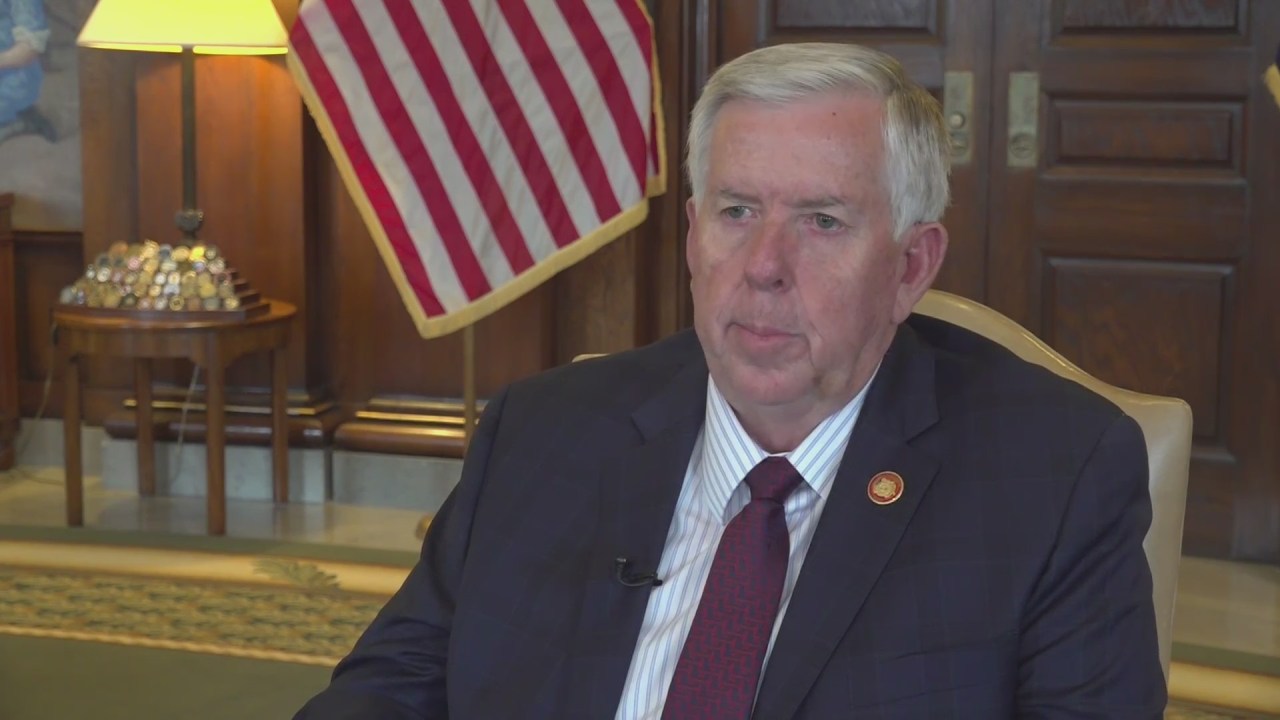 JEFFERSON CITY, Mo. — After a shooting at a St. Louis high school left a student and a teacher dead, what does Missouri’s top leader want to do to prevent it from happening again?

Missouri is perceived by some to have some of the most lax gun laws in the country. Gov. Mike Parson said more mental health resources are needed, not more gun laws.

“It’s such a shame that everyone wants to go all the way to the point of gun politics when you have a tragedy like this,” Parson said.

Police say 19-year-old Orlando Harris was the shooter, who entered Central Visual and Performing Arts (CVPA) High School Monday morning with an AR-15 and 600 rounds. It was a tragic scene as students fled the school as Harris opened fire inside. The two people who were shot and killed were identified as Alexandria Bell, 15, and Jean Kuczka, a physical education teacher, 61. Six other students aged 15 to 16 were injured, three of whom were shot. Another student fractured his ankle after jumping out of a third-story window to continue being shot at, police said.

“Bad people doing bad things are going to find ways to do those things,” Parson said. “You can outlaw all the guns you want, but the main thing is that someone goes and gets one, and they’re not law-abiding citizens anyway.”

Parson praised the quick response from law enforcement, saying it was preventing the situation from escalating.

“The police department there did a great job, the school system seems to have done exactly what it was supposed to do at the time, as much as it could to prevent a tragedy from being worse than what she was,” Parson said. .”

St. Louis Public Schools said security guards inside the school have no firearms, a district policy.

“You should never be afraid to give security guards a gun if they’re really trying to defend students or teachers,” Parson said. “If those officers had been armed yesterday, it might have been a whole different turnout.”

A district spokesperson said they had an armed response team and were first on the scene and first to shoot the suspect during Monday’s incident.

Compared to the largest school district in the St. Louis area, the Rockwood School District, they put full-time armed school resource officers in its high schools and colleges, but not in the elementary, according to the communications director of the district.

Parson said after Monday’s shooting, he called the mayor of St. Louis, the police chief and the school district superintendent to ask if state resources were needed.

“It’s just unfortunate,” Parson said. “It is a terrible and tragic event. I don’t even know if politics is going to solve anything at this point.

The school shooter had an AR-15 type weapon, 600 rounds

Democratic lawmakers called on the General Assembly after the shooting to pass tougher gun laws. CVPA Secondary School is in Sen. Karla May’s, D-St. Louis, neighborhood. In an interview on Monday, she said it was “only a matter of time before something like this happens.”

“‘We should have dealt this way before this happened,’ May said. ‘For this to happen elsewhere, it was a wake-up call to say listen, we really need to change the gun laws fire in Missouri.”

“When you go to some of the cities with the strictest gun laws, they have the highest homicide rates in the United States, so you know that’s not the answer,” said By its. “Trying to regulate firearms does not work, we know that. It’s the political argument and again, if you’re a mentally unstable person, you don’t know what that reaction will be. You can pass all the laws you want for that, but if they don’t follow the law, it won’t make a difference.

Missourians of any age can open the carry, but under federal law a person must be 21 to purchase a handgun and 18 to purchase a rifle. Under the federal Youth Handgun Safety Act, anyone under the age of 18 is prohibited from owning a handgun except in limited circumstances. The local government may limit where these firearms are allowed. Background checks are also required by the federal government if a firearm is purchased from an authorized dealer.

Instead of passing more laws, Parson said the state should spend more on mental health solutions and he wants judges and prosecutors to be involved.

“The reality is that the most important thing is what drove this young man to do what he did, and I’m telling you, the mental health side of that, I guarantee you, will be a bigger factor. that he how he came into possession of the weapon,” Parson said.

Harris was a CVPA graduate and had no criminal history. Although the exact motive has yet to be determined, police presented documents on Tuesday that may have hinted at mental health issues.

Some documents inside a car linked to Harris included this handwritten note:

“Mental health has to be part of stopping these things,” Parson said. “I would argue that anyone who takes other people’s lives, there’s a mental health issue there because it’s not normal to do that.”

This Thursday, the governor is going to Saint-Louis to meet the police who intervened on the scene. Next week, he plans to meet with CVPA students, teachers and school administrators.

“My heart goes out to this moment, not just today but for the months to come, and I think we all need to remember that their lives will forever be changed,” Parson said. “I just can’t imagine losing a teenage daughter, teenage son to a violent act like this. A teacher who does what he does every day to take that risk and stand up for his students.

After lawmakers repealed the legislation in 2016, anyone 19 and older can carry a concealed weapon without a license and no training is required. If Missourians choose, they can still apply for a concealed carry permit, which requires a firearms training course and a background check. Last year, the governor signed into law the Second Amendment Preservation Act (SAPA), which prohibits police officers from enforcing federal gun laws. If they do, they could be fined up to $50,000.

Dozens of agencies, including more than 60 police chiefs, have spoken out against the law, saying it interferes with federal partners and the use of national databases and resources.

Behavioral Health Response encourages anyone in crisis to call their lifeline at 988. If anyone wants to speak to someone or has questions about the organization, they can visit their Facebook page or contact them at 314-469- 6644 or text “Be Heard” to 31658.