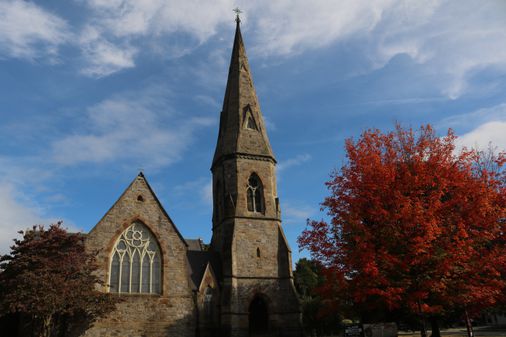 The Anti-Aid Amendment prohibits the use of public funds to support, maintain or aid a non-state religious organization. The Supreme State Court of Justice said, however, that churches can receive funding under the Community Preservation Act in some cases, but not for projects that support their basic religious activities.

The Community Preservation Act is a state measure that allows cities and towns to levy a surtax of up to 3% to support historic preservation efforts, as well as open spaces, affordable housing, and recreation projects. The state also provides matching funds.

Defenders of Grace Church have said their project will not violate the Anti-Aid Amendment because they do not use the tower for worship and it does not carry any religious imagery.

Robert Maloney, a member of the Community Preservation Committee, said at the meeting that they should decide which projects should receive public funding based on their knowledge of community preservation, not the law.

â€œI don’t think it’s up to us to decide whether or not it passes the legal test,â€ he said.

Maloney added that he agreed with proponents of the project that the tower benefits not only church members but also anyone passing through nearby Farlow Park.

â€œIt’s an iconic building. It is the type of building that gives a municipality its identity, â€he said. “I think that’s exactly the sort of thing we should be allocating money to to try and preserve.”

Some members of the community preservation committee said at the meeting that they were concerned about the amount of money Grace Church was asking for and asked if the church had considered additional sources of funding that could offset the contribution of the city.

The church said at a meeting on the proposal last month that it could not cover more than half of the estimated cost of $ 2.9 million for the repair and restoration of the tower with a campaign to fundraising and grants from organizations such as the Massachusetts Historical Commission.

Grace Church board member Leah Gassett told Tuesday’s meeting that the church had “done our best to exhaust external funding sources,” but a partnership with the city could help. help secure additional funds in the future. Without the city’s financial support to preserve it, the defenders said, the tower would likely have to be demolished.

“We’re not going to let go in terms of finding these funds,” Gassett said.

Ellen Ishkanian, the city’s spokesperson, said in an email that the community preservation committee recommended Newton give the church around $ 1.2 million – the majority of its proposal – for preservation funding that the city had already set aside for historic projects.

If the city council approves it, the remaining balance will be made up of funds allocated for historic preservation in the next fiscal year, she said.

Richard Kronish, a member of the Community Preservation Committee and chairman of the Newton Housing Authority, told the meeting that he was uncomfortable supporting the church’s proposal given the legal department’s findings and that he would vote against.

â€œThis is the opinion we have. I don’t have the capacity to challenge it, to doubt it, â€Kronish said. “I can’t see past it.”

Brody, the vice president, said Grace Church is making a big request, but the community preservation committee has been “way below” for years. his target to devote about 20 percent of its budget to historic preservation projects. It was reassuring, he added, to learn many other towns donated Community Preservation Act funds to religious organizations.

â€œThere’s certainly no guarantee this one won’t be challenged, but I don’t think we should be afraid of this,â€ Brody said at the meeting on Tuesday. â€œIf we think it’s a good project, which I think, I think we should go ahead. “

Ishkanian said in an email that the city expects Grace’s proposal to be on the roll at the first city council meeting in November. It will be sent to finance and either land use or zoning and planning committees, she said, before returning to full council for a final vote.

Shaun Robinson can be contacted at [email protected]

‘We think it’s worth saving’: Fairview Preservation Committee to Hold First Meeting to Discuss Plans to Save Church | muscat