Nathan and Philip Etter like to say that in the five years since moving from Chicago to Palatine, they’ve become some of the biggest fans in town.

They love their 136-year-old home, a Queen Anne Victorian home at North Plum Grove Road and Colfax Street that has won Hometown Pride awards since owning it. Their popular Instagram account, @HappilyEverEtterentertains its 8,750 followers with charming photos of the couple, their home and its landscaping.

Built in 1885, the building became a nursing home in the 1950s, then an insurance agency and a law firm until it was bought by a contractor who renovated it and rented it to the Etters. The couple lived there for a year and a half before buying it in October 2018.

“We feel lucky to own it,” said Nathan Etter.

During a recent visit, the Etters pointed out quirky features, like an ornate wooden railing, a Nathan favorite, and a fireplace mantle they found and reinstalled in January thanks to an Instagram follower. They are particularly fond of the turret of the house.

Nathan and Phillip Etter were able to find the fireplace mantle that had been removed from their 136-year-old home in Palatine.
– Brian Hill | Personal photographer

They’ve also come to love their neighborhood, which has many older homes, and they enjoy Palatine’s pleasant, friendly vibe, they said.

“Both of our hearts are truly in this village,” said Nathan Etter, who serves on the Palatine Beautification Commission.

But they were shocked to learn that Palatine, unlike most of its neighboring municipalities, does not have a historic preservation program.

“If we wanted to demolish this house, the village couldn’t stop us, which is horrible,” Nathan Etter said.

The Etters spoke at the village council meeting last week about the need for a historic preservation commission at the Palatine.

The couple envision a commission that would oversee a voluntary program of local historic landmarks. This means owners of historic buildings could apply for a local landmark designation, which would prohibit owners from razing buildings and require permission to make architectural changes to the exterior of the home.

“We want to keep that feel in this community, especially downtown. It will lose that if these homes are torn down,” Philip Etter said. “The Etters are so passionate about the neighborhood and trying to bring people together for it,” he said. “It takes a lot of time and a lot of energy to do it. We support them and we support what they are trying to do.”

However, the national designation, given by the National Park Service, does not protect the buildings from alteration or dismantling, said Brittany Niequist, a member of the Crystal Lake Historic Preservation Commission.

“The only way to legally protect a structure from demolition or significant alteration is to have a local governing body overseeing that process,” said Niequist, who lives in a historic home in Crystal Lake. Phillip Etter talks about the love he and his husband have for their 136-year-old home in Palatine, with which they are lobbying to establish a Historic Preservation Commission.
– Brian Hill | Personal photographer

Historic Preservation Commissions receive applications for monument designation and can make recommendations for approval, but the final decision rests with the city council or village council. Municipalities may have the power to impose historic status against owners’ wishes, Niequist said, but she’s never heard of it.

Crystal Lake “got closer” to the 1865 Dole Mansion that was ultimately saved through fundraising, she said.

Last year, the Elgin Heritage Commission recommended marking a 119-year-old building against its owner’s wishes, but the city council did not approve the move. 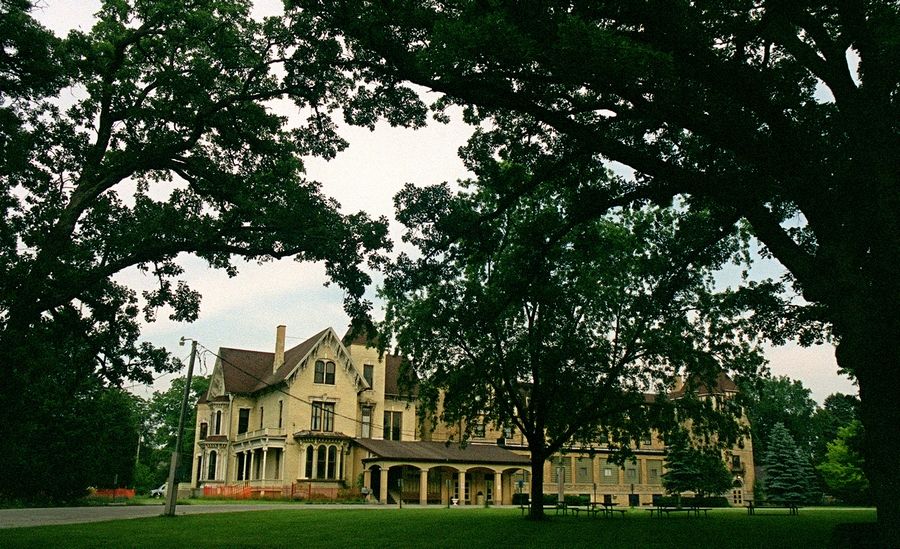 “These villages have done a phenomenal job of capitalizing on their historic and scenic charm,” said Nathan Etter.

Flagship houses are about respecting the valuable contributions of past generations while keeping an eye on progress and the future, Niequist said.

“A lot of council members are concerned that by tagging homes it will take away from the city or deter people from buying those properties,” she said. “What I’m seeing right now is this growing trend, especially among young people who are deliberately looking for historic homes to buy.” The Etters said that over the past 18 months, four young Chicago couples have moved into older homes in their neighborhood.

“These new families are just the beginning of what may be a much larger wave of young families who will be drawn to the Palatine if we preserve or restore our historic buildings,” said Nathan Etter.

The response from the village council was cautious but curious.

Councilor Tim Millar, who chaired last week’s meeting in the absence of Mayor Jim Schwantz, said village staff should research the issue and provide feedback for “a framework to have the discussion.” .

The Etters said they were happy the conversation was moving forward.

“Whether people like it or not, people talk about it,” Nathan Etter said.