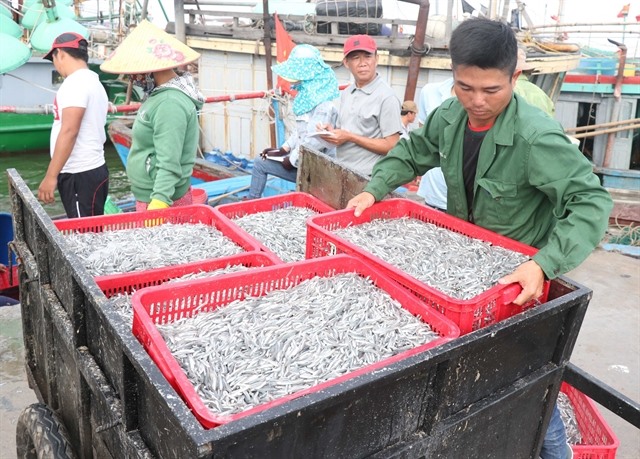 Protecting raw resources vital for the future of fish sauce

Fisherman sorting anchovies in a port in Quáº£ng Trá»‹ province. Viá»‡t Nam now has 1,500 manufacturers of fish sauces; of which 35 are specialized in manufacturing fish sauce for export. – Photo VNA / VNS

HÃ€ Ná»˜I – Fish sauce is a staple that can be found on tables from top to bottom across the country – in fact, the General Bureau of Statistics (GSO) reported last year that the average person consumes 3 , 9 liters of fish sauce per year.

However, the industry risks being overexploited as producers try to meet demand.

The issue was discussed at a recent workshop organized by the Vit Nam Fish Sauce Association, the Viá»‡t Nam Fisheries Society and the Marine Fisheries Research Institute, under the Ministry of Agriculture. and Rural Development (MARD).

Speaking at the workshop, MARD Deputy Minister PhÃ¹ng Äá»©c Tiáº¿n said by 2030, fisheries production could be reduced to 2.8 million tonnes while aquaculture production reaches seven million. tonnes because the current fishing intensity was too high.

The fish sauce processing industry has generated jobs for 10,000 people and millions of fishermen, traders and salt workers.

The processing industry shows great potential, however, its export turnover has left behind production capacity of 12.6 percent of total production.

Äinh XuÃ¢n Láº­p, deputy director of the Center for International Cooperation in Sustainable Aquaculture and Fisheries (ICAFIS) of the Viá»‡t Nam Fisheries Society, told participants that the Vietnamese fish sauce production industry has a source abundant with about 2.45 million tonnes of fish. The fishing industry has a history of 500-600 years and a large number of highly skilled fishermen. The exploitation has formed a close link between fishing and processing.

In addition to the requirements for hygiene and protection of human health, the fish sauce industry should be responsible for the fishing sector. It is a matter of a common roadmap and also of the country’s commitment to the international market.

Viá»‡t Nam now has 1,500 manufacturers of fish sauces; of which 35 are specialized in the manufacture of fish sauces for export. However, many of them have not yet fully ensured hygiene and food safety conditions such as risk analysis and critical control points and ISO standards. Fish sauce processors still showed weaknesses in post-harvest storage.

In addition, EC Decision 1005 declared that fishery products and those derived from seafood exported to Europe must have a certificate for illegal, unreported and unregulated (IUU) fishing regulations. .

In addition, Vietnamese fishing vessels near the coastal zone are not fully equipped with equipment that complies with IUU regulations, such as fishing vessel monitoring systems. Fishing boats are still small and the cost of operation remains high. Fishing sources near coastal areas are increasingly depleted due to environmental issues and climate change.

MARD, the Ministry of Health and the Ministry of Industry and Trade are expected to support the production of aquatic products and fish sauce. Foreign customers, interested in Vietnamese fish sauce, are a huge opportunity for domestic fish sauce manufacturers.

To promote the fish sauce industry, Láº­p suggested leading models of community resource management by working for the sustainable exploitation of aquatic resources. The close ties between the Fish Sauce Association and fish sauce manufacturers should be strengthened to bring more Vietnamese fish sauce to overseas markets.

The country’s marine resources are overexploited. To protect and develop the resources of the sea in a sustainable manner, the fish sauce industry must find other marine sources with high nutritional value. It should focus on studying the biological characteristics of seafood species to determine the location of spawning grounds, breeding grounds and seasons to protect marine sources. – VNS