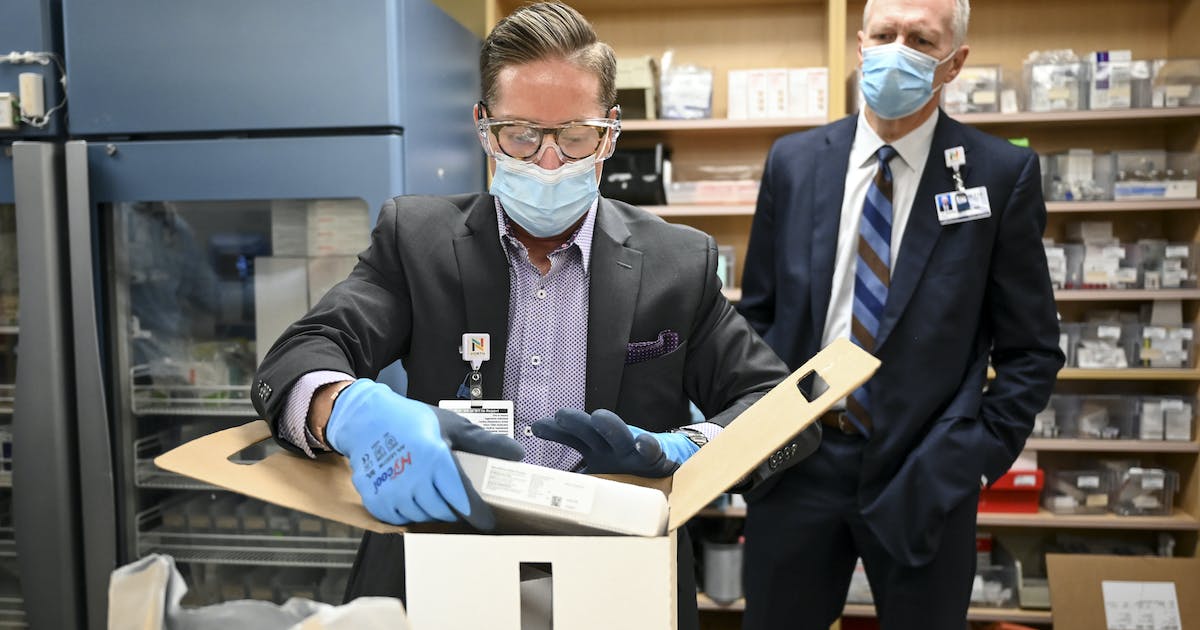 I am 65 years old and like many others I am delighted to receive the first dose of the coronavirus vaccine. I don’t mean to cut it short, and I understand that we all have to patiently wait for our turn, but to have a sense of when that turn is likely would be wonderful. I think Governor Tim Walz and the people he put in place are doing a good job in a tough situation, but they need to sort out roughly when we can go online and start making appointments to get vaccinated, as happens in other states.

Having tangible hope, even months in the future, would help us all.

Have you ever been on a plane that landed and taxied to the boarding gate, only to be told by the pilot, “We are waiting for a gate officer to put the gangway in place” ? Everyone’s reaction is the same: â€œDidn’t they know we were coming?

Unfortunately, this is where we are in the delivery of the COVID-19 vaccine. The slow deployment is due to incompetence at the national level, led by state and local officials on both sides. They have had months to plan but still have no plan.

Today, it is Israel that excels in delivering vaccines, acting on its sense of urgency and driven by a united public goal. Israel, a country of 9 million people, has administered more than 10 times more vaccines than Minnesota.

The citizens of Minnesota (or any other state) should not tolerate this leadership failure.

The refusal of some health care workers to be vaccinated is disturbing but not surprising (“Distrust of vaccines against the horrors of the virus”, front page, January 15). Public bodies could make proof of vaccination a condition of participation in public programs such as schools and other events where people share proximity. Likewise, business leaders could impose a mandatory vaccination requirement on employees, especially those who work near others and the public. Voluntary participation is preferred but not sufficient to meet the overriding interest in achieving herd immunity through the vaccination program.

A message to all those people who are anxious about the COVID vaccine: think outside the box and let the millions of us who want the vaccines get them.

How to get the most out of all

Despite the upcoming administration change, it would be wise for the state of Minnesota to heed the secretary’s advice as we ramp up our COVID-19 vaccine distribution efforts. Community health centers offer state health officials two important assets in the effort to rapidly disseminate the vaccine to populations particularly vulnerable to contamination by the virus.

The first is a predefined distribution infrastructure. The state’s network of 17 community health centers provides care at 83 sites in rural communities and urban neighborhoods in Minnesota. Additionally, the secretary understands the national reach of community health centers as they provide care to 30 million Americans at more than 10,000 delivery sites. This pre-built infrastructure serves low-income populations who face significant geographic, cultural, linguistic and transportation barriers to accessing care.

Second, community health centers engender a unique level of trust with their patients, many of whom have experienced historical trauma within our health system. This trust has grown over decades through committed service and a dedication to meeting patients where they are in society. This positions Minnesota’s network of community health centers as critical contributors to the mandate of empowering disenfranchised communities to access the life-saving COVID-19 vaccine.

Community health centers are unique health care providers who live at the intersection of public health and primary care. In the name of opportunity and equality, Minnesota would be wise to use each of Minnesota’s 17 health centers as COVID-19 vaccination sites.

The author is the CEO of the Minnesota Association of Community Health Centers.

Problem: How to best distribute the COVID-19 vaccine.

Objective: Vaccinate the population as soon as possible.

When: Scheduled appointments. Each polling station has a list of voters registered to vote at their station. We have the name, address and date of birth of each voter (if needed). Appointments could be assigned in small increments over a 12 hour day and a 5 day week. Each elector would be notified by letter of the day and time of their initial nomination as well as of their follow-up nomination. Those who miss their appointments would be fired and rescheduled to a later date / time in order to maintain the schedule.

Staff requirements: The calculation is simple; each station would be staffed with a certain number of employees necessary to achieve the programming objectives, limited by the number of doses available. Polling station staff could be used to register patients and perform pre-testing (i.e. taking temperature). Medically trained personnel would administer the vaccine. Medical personnel could come from hospitals, clinics, pharmacies, first responders and the National Guard.

Vaccine management: Each morning, vaccines would be delivered to each post by the National Guard in coolers lined with dry ice to ensure its viability. The medical staff would be responsible for its subsequent management (ie warming and preparing the syringes).

The goal would be to vaccinate people across the state over two weeks, each separated by 21 to 28 days. That said, in the event of a shortage of vaccine doses or personnel, polling stations could be prioritized according to population density. For example, stations in city centers could be activated first, then to exit rings in a city if supply permits.

Scarcity is a reason to preserve

Is the Knutson Co. building near downtown Minneapolis attractive? Certainly not. Is it still worth keeping? Probably yes (â€œDefining Merit in Historic Preservation,â€ editorial, January 11). The building is an example of Brutalist architecture – a style that emphasizes modern lines emphasizing building materials and structural elements rather than decorative design. Rough concrete is often used, such as for the Knutson Co. building, because of its low cost. While this style is common in some parts of the world – Vancouver, Portland, Oregon, and countries of the former Soviet Union come to mind – it is rare in Minneapolis-St. Paul metropolitan area. Some examples include the Malcolm Moos Health Sciences Tower and the Rarig Center (both on the University of Minnesota campus), Peavy Plaza, and Riverside Plaza. Since brutalist design is rare here, the Knutson Co. building should be preserved, although it may not be considered attractive or appreciated by many.

We want to hear from you. Send us your thoughts here.