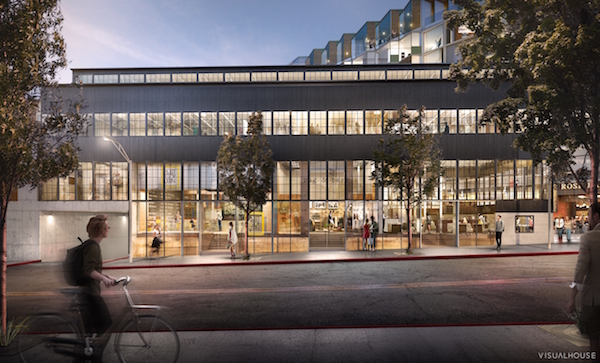 The environmental impact report on the proposed hotel and shopping center on Robertson Boulevard, known as Robertson Lane, will be presented to the West Hollywood Historic Preservation Commission on Tuesday.

The commission will meet at 7 p.m. at the Plummer Park Community Center, 7377 Santa Monica Blvd. near North Vista. The meeting is expected to draw a large crowd due to the project’s location on the factory site, a building at 661-665 N. Robertson Blvd. which in February was designated as eligible for listing on the National Register of Historic Places

An EIR identifies and examines the likely environmental effects of a proposed project and proposes measures to avoid, reduce or compensate for them. The 343-page report was commissioned by Faring Capital, the project developer, and prepared by Dudek, an environmental impact consultancy in Pasadena. A full copy can be found online.

At a meeting in December 2014, area residents raised questions about a variety of possible impacts from the project, including shading on nearby buildings and lack of parking during its construction. But the bigger issue, which is expected to dominate Tuesday’s discussion, is the preservation of the factory building.

Those who advocate for its preservation note that it housed the Mitchell Camera Co., maker of Hollywood film equipment, from 1929 to 1946, and from 1974 to 1993, Studio One, the gay nightclub.

Faring Capital’s Jason Illoulian said he intended to restore the plant, reorienting its location to the project site. The Robertson Lane project will include a hotel with more than 250 rooms, an underground car park with more than 1,000 spaces, as well as cafes and small commercial spaces. The project will also include a 30 to 35 foot wide lane providing a visual and physical connection between Robertson Boulevard and La Peer.

The RIE project recalls the history of the Factory and its various modifications over the years.

— 1942: Addition of toilets for employees and changing rooms.

— 1943: Construction of a one-story building believed to be the plumbing and carpentry building adjacent to the northwest corner of the property (disappeared).

— 1952: Addition of a loading dock to the south elevation of the building… Several additional modifications have been identified through a property inspection, evaluation of historical photographs and additional research specific to the property:

— Complete transformation of the Mitchell Camera Corporation office building. This building, which was constructed in 1929 as a one-story Art Deco building to house the offices and administrative functions of the factory, has been altered in such a way that it retains none of its original Art Deco features. origin.
the entrance to the multi-storey nightclub, the addition of an exterior staircase and the construction of a patio accessible by French doors.

— Addition of the south elevation to accommodate another commercial entrance.

— Modification of the west facade to accommodate a new nightclub entrance. The entrance to Studio One was preceded by a fabric canopy; this canopy was removed and replaced with a large steel canopy.

— Numerous interior alterations throughout the building’s history, although little is known of the extent and dates of these alterations.

According to the EIR, Faring’s proposal to restore and preserve the building “would involve dismantling the 24,990 square foot factory building and its former 6,764 square foot office building (which was significantly altered during of its conversion into a restaurant) and the reassembly of approximately 140-foot-long two-story portion of the original 240-foot-long building.

“The building would be repositioned from its current location running east to west between Robertson Boulevard and La Peer Drive to a new on-site location. The building would be located on a north-south axis along Robertson Boulevard at the eastern edge of the project site. The current Robertson Boulevard facade of the plant would face north on the open air paseo. The north-facing facade would be restored to its original factory appearance, including the replacement of non-historic windows with original salvaged windows, the retention and reuse of the original waffle steel cladding, and the removal non-historic elements such as an exterior staircase.

“The length of the building along Robertson Boulevard would incorporate new storefront entrances for commercial tenants, but would otherwise be restored to its original factory appearance. The current facade on La Peer Drive would face south as part of the proposed reconfiguration of the building, with the south-facing façade restored to its original Studio One nightclub appearance.