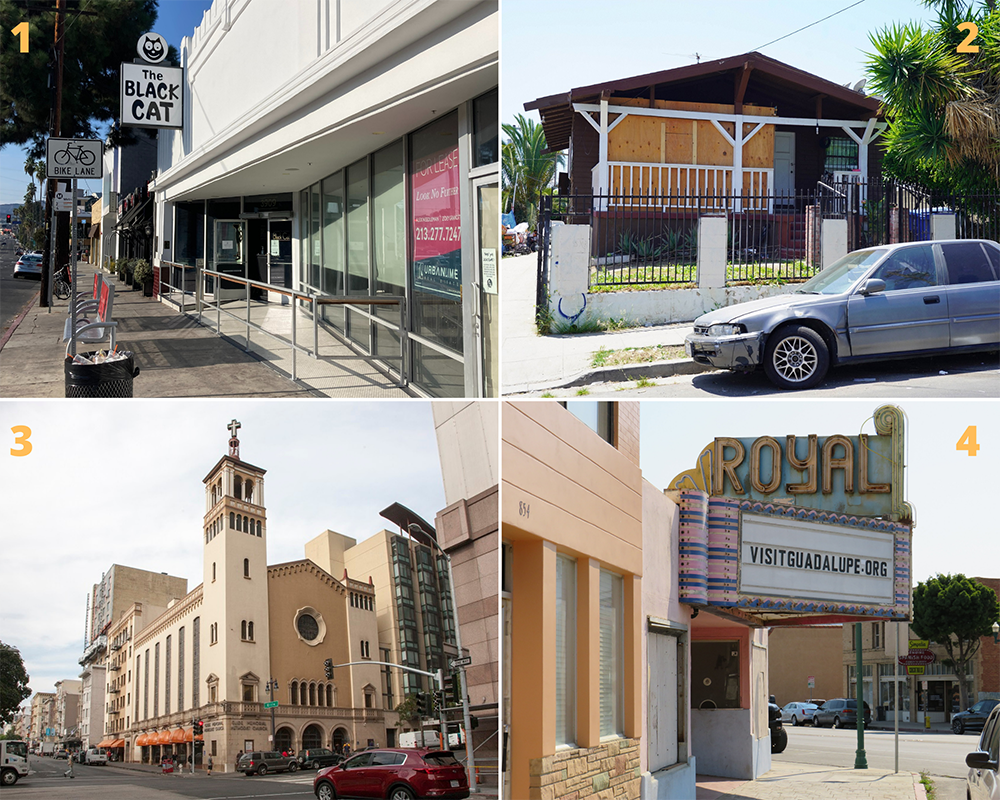 January 12, 2022 – The California State Historic Resources Commission (Commission) will meet virtually on Friday, January 21 at 9 a.m. to consider eight applications for federal historic designation and one application for state designation.

Placement on the national register can help bring positive attention to a historic place and give a property the honor of being included in the national list of cultural resources worth preserving. This can provide some degree of protection against adverse effects resulting from federally funded or authorized projects. Registration also provides a number of incentives for the preservation of historic properties, including special building codes to facilitate the restoration of historic structures, and certain tax benefits.

Some of the applications considered by the Commission include three properties associated with LGBTQ rights: the Morris Kight House and Black Cat Tavern, both located in Los Angeles, and the Glide Memorial Church in San Francisco. Other properties on offer include the Royal Theater as a type of property located in the Japanese enclave of Guadalupe, owned, built, and operated by Japanese Americans for their immediate community and neighbors.

All properties reviewed at the meeting include:

The theater features a mix of modernist design elements, including a curved Art Moderne corner and smooth stucco wall surface, combined with geometric Art Deco design elements on the ornate triangular shaped marquee. The 1940 theater was one of several owned by Arthur Shogo Fukuda, who was forced to sell the building before being interned at the Jerome Relocation Center in Arkansas. As a type of property located in the Japanese enclave of Guadalupe – owned, built and operated by Japanese Americans for their immediate community and neighbors – the Royal Theater meets Asian American registration requirements and the Pacific Islands in California, 1850-1970. for types of property associated with community service organizations.

The Georgian Revival brick building was built in 1921 and repaired in 1953, following the Bakersfield earthquake of 1952. In the early 1920s, a prosperous period for the oil and agricultural industries that dominated Bakersfield, Bakersfield town center reflected its wealth in its buildings. In 1952, the Bakersfield earthquake devastated the unarmoured masonry building. Unlike many other building owners, the Woman’s Club members chose to repair rather than raze the clubhouse. As a result, the building remains an early, intact example of a purpose-built women’s clubhouse in the 1920s and one of the few pre-war and pre-earthquake commercial buildings in Bakersfield . The Woman’s Club of Bakersfield is also the oldest purpose-built clubhouse in Bakersfield and the oldest known example of a building designed by Charles H. Biggar in California.

The building was designed by master architect Carleton M. Winslow Sr., one of California’s earliest proponents of Spanish-style architecture, in 1930. The ornately decorated Spanish Colonial Revival building incorporates Florentine, Italian Revival, Renaissance, missionaries, Greeks and Moors inside and outside. Located on the west wall of the auditorium is the “Pastoral California” mural, dedicated in 1934. The mural was repainted in 1939 and restored in 1997, after the property was placed on the National Register in 1993 under the name of Louis E. Plummer Hall. The vibrant 15-by-80-foot, 4-inch mural is sheltered by an expansive covered arched walkway that runs the length of the auditorium. Funded by the Federal Works of Art Project, the mural depicts California’s mission and rancho periods from 1776 to 1846 in a series of scenes featuring animals, games, and early Mexican and Spanish historical figures. California and Orange County.

Packaging Center of the Association of Orange Producers of Santiago

The 1918 Packing Station, a National Registered Orange Historic District Contributor, represents a once vital local industry and an increasingly rare type of property in the area. The Santiago Orange Growers Association operated the largest Orange packing plant in 1918 and was the world’s largest shipper exclusively of oranges after 1929. Two annex buildings, built by the association around 1920, were moved in 2018 to allow the construction of a new dormitory. building. The ancillary buildings remain on the Packing Station property, retain their historic orientation, and maintain their clear visual relationship to each other, the train tracks, North Cypress Street, and the Packing Station. The construction of the new residence altered without destroying the historical spatial relationships that characterize the property.

The circa 1872 one- and two-story commercial building is located along the Bohemian Highway in Freestone, a rural community with a long agricultural and recreational history in Sonoma County. The property played a vital role in the development of Freestone as a major transportation and trade hub in Sonoma County and northern California. Despite “1876” in numbers added to the facade after 1970, primary resources support a construction date of around 1872 as the building was in place before construction of the railroad, which began operations in 1876. Freestone Store has continued to be of commercial importance in the community through the counterculture movement of the 1960s. A concerted effort to rehabilitate and restore historic buildings in Freestone to help support the city’s economy in 1972 led to the identification of the city in 1974 as the first locally designated historic district in Sonoma County.

Historic district of the Carthay districts

The district comprises three subdivisions established between 1922 and 1933, including Carthay Center, Fairfax Park and Olympic-Beverly Plaza. They tangibly express the practical application of the key ideas of City Beautiful to residential developments during a period of intense growth in Los Angeles, and constitute an excellent collection of Renaissance-style residential architecture, including both single-family residences and multi-family.

The 1931 church and adjacent building are located in the Tenderloin neighborhood of San Francisco. It was designed by James W. Plachek and built in the Mediterranean Revival style. The property is part of the historic district of Tenderloin. The property is nominated for its association with social history as a women’s residence in the 1930s-1950s and early LGBTQ history in the 1960s, black and Asian ethnic heritage in the 1960s, and as a significant example of the work of architect James W. Plachek.

The Craftsman Bungalow, built in 1911, is significant for its association with Los Angeles gay activist Morris Kight, who moved into the house in 1967. Kight’s house became a meeting place and organizing center associated with the establishment of several gay rights organizations and events, including the Los Angeles Chapter of the Gay Liberation Front, the Christopher Street West Parade, and the Gay Community Services Center (later the Los Angeles LGBT Center).

All nominations and photographs of the properties under review are available online.

General inquiries about the Commission are handled by Twila Willis-Hunter. She can be contacted by phone at (916) 445-7052 or at the same mailing address listed above.