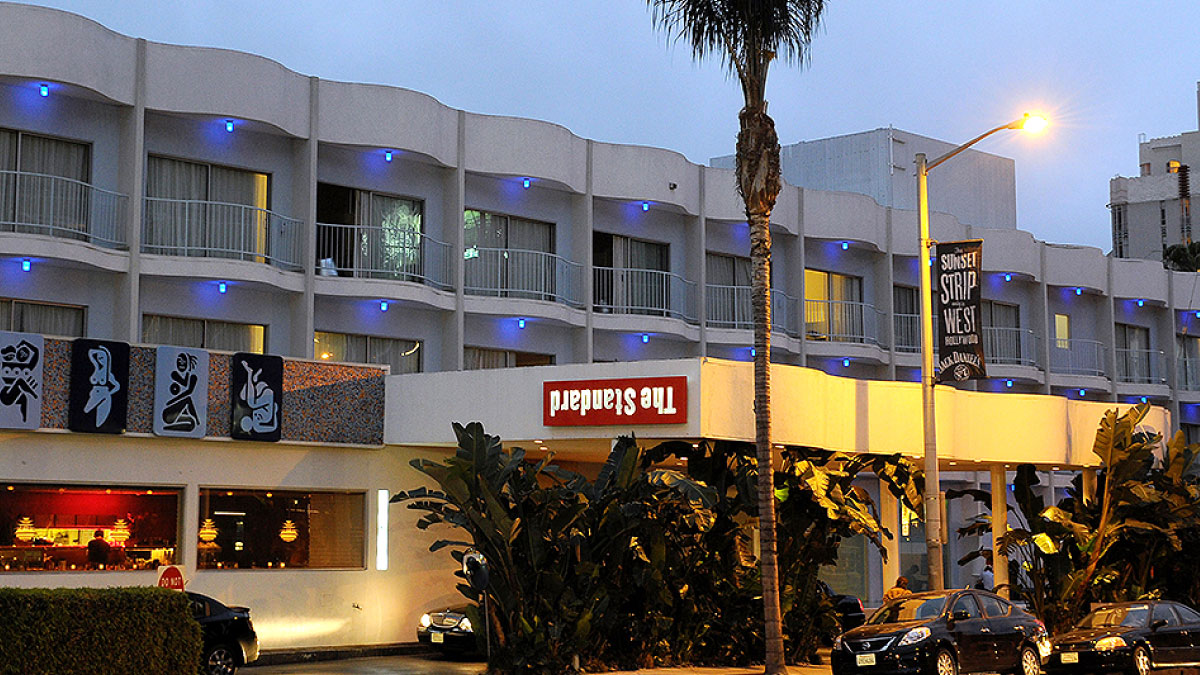 The West Hollywood Historic Preservation Commission will vote tonight on whether to recommend the former Standard Hotel on Sunset Blvd. for designation as one of the city’s cultural resources.

Tonight’s much-anticipated discussion was originally due to take place last month but was postponed by the committee. The meeting is expected to attract even more public commentators than the one in March.

The former Standard Hotel at 8300 West Sunset Blvd. was built in 1962 by Julian Weinstock Construction Co., and it was originally called the Hollywood Thunderbird Inn. The hotel was part of a grand plan to redevelop the Sunset Strip into a high-rise financial district.

Three decades later, the building was purchased by André Balazs, who had led the renovation of Château Marmont in 1990. With the support of Leonardo DiCaprio, Cameron Diaz, Benicio del Toro and members of Smashing Pumpkins, Balazs transformed the building into a hotel that reopened in 1999 as The Standard. It’s become one of the hottest stays on the Strip for years.

The building has been on the California registry since 2010. The application for cultural resource designation was submitted last August by Steven Luftman on behalf of SIA Projects. City staff recommended that the Commission approve the proposal, which would place the decision in the hands of city council.

The building, according to their report, is an example of the particular architectural and historical elements of the city. Attributes such as location, design, setting, materials, workmanship, and sentiment are all considered to determine whether or not a building deserves the accolade.

“The Thunderbird Inn was built at the start of the resurgence of the Sunset Strip in the early 1960s, when high-rise office buildings, hotels and apartments designed in the mid-century modern style replaced buildings in neo-period style with one or two floors. The period of significance for this criterion is 1962, when the building was constructed as a distinctive example of an RV hotel designed in the mid-century modern style with its horizontal massing, flat roof, stucco cladding and the sophisticated use of travertine cladding. The building’s design also incorporates subtle Googie-themed features, including the geometric curvilinear volumes of repeated wave-like horizontal bands forming room balconies that catch the eye of the passing motorist. The building was also constructed on a massive concrete base containing the two-level parking lot that took 22 hours to sink, which was one of the largest in Los Angeles County at the time and a significant structural achievement.

The city passed a historic preservation ordinance in 1989 and has since designated more than 90 historic and cultural resources, including six historic districts.

The meeting starts at 7 p.m. tonight.

To participate by providing a Electronic commentary:

***Your comments and information will become part of the official public record. If you do not want your personal information included in the official record, please do not include your address and/or telephone number***.

To note: Electronic comments received by 2:00 p.m.. will be forwarded to the Historic Preservation Commission and posted on the City’s website as part of the official minutes of the meeting.

1. You are strongly encouraged to email [email protected] prior to the Historic Preservation Commission meeting to be added to the list of public speakers for the meeting.

Please include your name, phone number from where you will call, and what element you would like to talk about.

You will be put on hold in the virtual waiting room until it is your turn to speak.

3. Please mute your phone until you are called to speak. Public comments are limited to 3 minutes per speaker.

4. You can participate and view the meeting via the Zoom platform:

When you enter the meeting, be sure to turn off your video and mute the sound.

If you would like to make a public comment, please use the Zoom app’s “raise hands” feature. You will be called at the appropriate time. Please enable your video and audio to make your comment public. Please join the Zoom meeting here:

To comply with the American with Disabilities Act of 1990 If special assistance to attend this meeting is required (for example, an American Sign Language interpreter for those who are deaf or hard of hearing), you must call or submit your request by write to the City Clerk’s office at (323) 848-6409 at least 48 hours before the meeting. The City TTY line is (323) 848-6496.

Written materials distributed to the Historic Preservation Commission within 72 hours of the Historic Preservation Commission meeting are available for public inspection immediately upon distribution to the Department of Planning and Development Services, please submit electronic requests to [email protected] weho.org during normal business hours or contact HPC Secretary, Sharita Houston at [email protected]