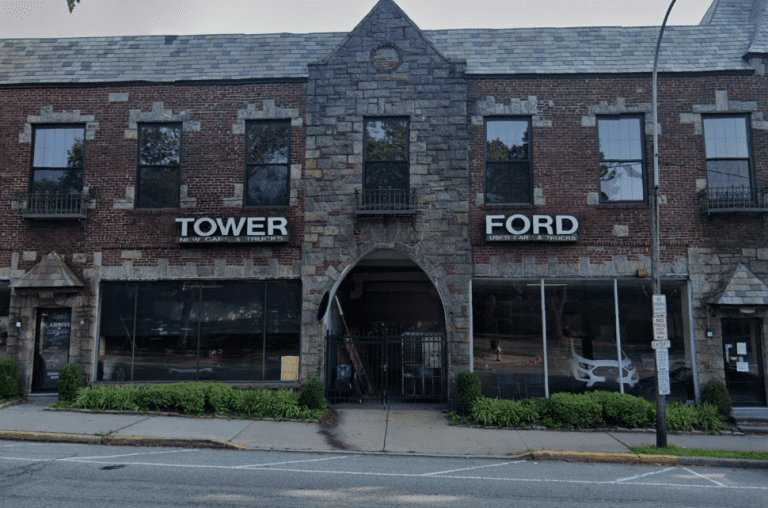 The Thomaston Village Monuments Preservation Commission will meet on February 8, when the decision on the monument status of the former Belgrave Motors and Tower Ford building could be made.

The building, located at 124 S. Middle Neck Road, has been a hot issue since July, when initial plans were submitted, then withdrawn, to develop a five-story apartment complex on the property. During the Jan. 4 commission meeting, residents of the peninsula, historical experts, and the village-hired consultant, Archeology Historic Resource Services, made presentations arguing that the building merited Village Historic designation.

Jason Flatt of Archeology Historic Resource Services said research by his group concluded the building met the village’s definition of a landmark and maintained a “very high degree of integrity”.

Nancy Solomon, former preservation consultant for Great Neck Plaza, said the peninsula’s long history with automobiles and repair shops on Middle Neck Road reinforces the building’s historic significance and should be considered a landmark. of landmark.

“The Tower Ford building is truly one of those pristine gems and reminders of the history of Thomaston and all of the surrounding villages that are part of Great Neck,” she said. “The centrality of the automobile in the history of this is essential to understand and recognize.”

Architectural historian and preservationist Anne Walker spoke about the building’s Tudor Revival style architecture, which is similar to other structures on the Great Neck Peninsula, some of which have earned landmark status through the village of Great Neck Plaza.

“Like the surrounding houses, the Tudor Revival style gave Belgrade Motors a layer of respectability and tradition, integrating this building into its context,” Walker said. “Not only is the integrity of the building intact, but its continued use as a motor showroom since 1931 and its place within the context of Great Neck’s architectural tradition make it exceptional.”

With more than 100 members of the public on the Zoom call, every resident who spoke out was in favor of granting the building landmark status. The state Department of Parks, Recreation and Historic Preservation declared the site eligible to be considered a historic site on October 29.

Stephen Limmer, legal counsel for 124 Middle Neck Realty LLC, which presented development plans for the five-story apartment, asked the committee at the meeting to adjourn the case for 120 days so that the plaintiff could “Make an adequate presentation to protect his interests.”

Residents asked the committee not to grant Limmer’s request for a delay, saying everyone in the village was aware of the Jan. 4 meeting date when it was scheduled for late November. The committee ultimately decided not to grant the adjournment.

Limmer, in a follow-up letter sent to the Village on Monday, again asked the commission to adjourn the case until May 1 so that his client could offer multifamily housing acceptable to the Village, despite strong residential opposition. Limmer also said his client did not believe the building deserved to be granted landmark status.

“My client believes there is no historical, aesthetic or other aspect of the building for which it should be given landmark status, thereby unduly limiting its use and imposing unwarranted additional expense on its maintenance,” Limmer said in the letter.

In December, the village repealed a local zoning law which, along with the proposal, was met with strong public opposition. The law was passed at a meeting in July and allowed the board to have “exclusive and absolute discretion” over the terms and license for incentive use that may be granted to certain nominees. The law applied to plaintiffs who owned property located partly within the Apartment B and Residence 10 zoning districts, a total area of ​​at least 0.75 acres but not exceeding one acre, a depth at its highest point of at least 200 feet and street frontage on Middle Neck Road of at least 230 feet.

The property at 124 S. Middle Neck Road, the former site of Tower Ford and previously proposed apartment complex, is partially within the zoning neighborhoods of Apartment B and Residence 10, has an area total of 0.96 acres and a depth of 234 feet. , according to village documents.

The law, which remained in effect for 150 days after its enactment in July, expired on December 11, before it was repealed by the village.

The February 8 commission meeting will be held via Zoom at a link posted on the village website at 7:30 p.m.